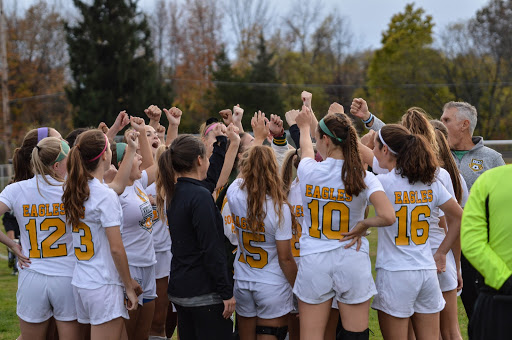 Although the MK varsity girls soccer team started off the season with a record of 0-4, it was not revealing of the team’s true talent. Towards the beginning of the season, the team struggled with intensity and urgency. It took awhile for everyone to be on the same page, on and off the field. This all stemmed from the players challenging each other at practice. Individually, players were all very skilled and hardworking, but struggled with connecting ideas. After getting out of their heads and realizing that they were better than the 0-4 record, they worked hard and got their first win over Sommerville. After winning that game, players realized they were capable of beating good teams.
When it was time for the county tournament and seedings, other school’s coaches saw potential in Knolls. The team was seeded number five in the county, which was unexpectedly high considering their record at the time. Throughout the county tournament, the team worked hard and played for each other. They made it all the way to the semifinals and their opponent was school rival, Randolph. Previously, they had played them twice, losing the first game and tying the second. They were determined to win this game. After ending normal regulation time, tied 1-1, they went into overtime. After double overtime, it was time for penalty kicks. The team was not able to win and therefore they were out of the county tournament, unable to become three-time county champions. The team still had their normal season to play for, so they worked hard in order to get a good seed for the state tournament. Even though they were not able to beat Randolph this season, they were able to beat sister school, Morris Hills, 5-1. Being that it was the last game of their normal season, the girls were determined not to lose. During the state tournament, the girls won their first game against Fair Lawn in penalty kicks. Their next opponent was the number one seed, Ramapo. Knolls was not able to win this game, losing 2-0, making this the last game for the girls. The team finished with a 6-7-6 record. Senior and captain Kate Walsh said “Towards the beginning of the season, we struggled to play as a team but after practicing hard and learning to play on the same page, we really turned our season around. Even though we did not have as much success as we wanted to, I am still proud of how my senior year ended with these girls.”