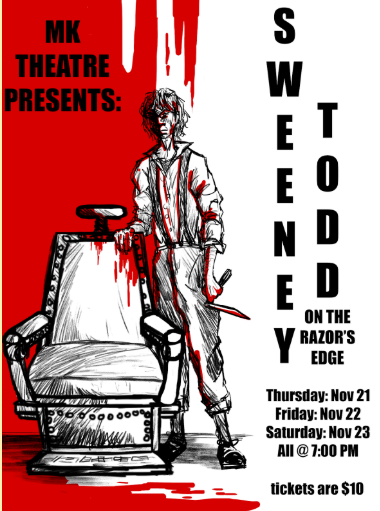 This year’s fall play was “Sweeney Todd: On the Razor’s Edge”. The seating for the audience was set up on the stage in a black-box theater, making the experience much more intimate, and allowing the audience to become fully captivated by the story. The plot of the story focuses on a barber, Sweeney Todd, who kills his customers that have large sums of money on them, for his own selfish gain. The first person he kills has a pearl necklace in his pocket worth a lot of money that was supposed to be given to a specific woman. Once this woman hears about the disappearance of the necklace and the person who was supposed to deliver it, she does some detective work to learn more about the one thing that her loved one left for her. Throughout the play, the audience learns more about the corrupt Sweeny Todd and how he covers the tracks of all the murders he has committed.

Rosemary Camilo, who played Mrs.Lovett, stated that  “It was incredibly easy to get into character with this cast! The level of professionalism and poise they showed on stage every night made the show that much more real to me.” The members of this performance leaned on each other, elevating all of their performances. All of the students, from those who played small parts to the main character, truly became their characters while on stage. To start, Sweeney Todd was played by senior, Ryan Murry. The part was a difficult one because, as the director’s note says, “In a melodrama, there are few shades of gray” and Sweeney Todd is pure evil; Murry did a great job making it so the audience could hear Sweeney Todd’s intentions in all of his many lines. This part was played well making the story entertaining because the entire story revolves around his unjust actions. Murry said “I am so lucky to have had the opportunity to play Sweeney Todd and act amongst some really talented people. The role of Sweeney Todd was a fun one to explore and I enjoyed every moment of it”.  It was not only Murry’s performance that was a huge success; the entire cast was brilliant. An example of a smaller part adding so much to the production, was at the start of the second act, in an insane asylum when one of the inmates was curled up in a ball on the floor singing a beautiful song. This is the only scene that this character showed up in, and because of the way that Olivia Greenberg portrayed the character, the audience truly cared about the stranger. This scene was heightened by the lack of props on the stage, drawing all of the audience’s attention to this one person. All of the actors were astonishing in their performances; as a result, this high school play felt professional and the characters felt real.

The simplistic set, appropriate costumes, and the small, yet quality additions to each character’s appearance added to the bitter mood and beautiful appearance of the play. To start, all of the props and costumes abided by a clear color scheme consisting of duller shades of green, brown, maroon, and black/grey. The colors added to the gloomy feel of the play. In addition to the costumes contributing to the mood of the play, they also illustrated to the audience the financial state of every character and their role in the story. For instance, Sweeney Todd’s apprentice, Tobias Ragg’s clothing had square patches showing that they were old. This added to Tobias’s character because it showed why he would work for Sweeney Todd and why he wanted to ignore the cruelness of his boss: he was desperate for money. The same tactic was used for many other characters. Mrs. Lovlet (played by Rosemary Camilo), the cook that sells pies made out of the meat of all the people Sweeney Todd has killed, was dressed in a black corset to show the grim state of her existence, playing a part in Sweeney Todd’s murders, through her dark outfit. Every character had shading of back under their eyes, displaying that they were all tired and miserable. This small addition did a lot for the story because, with the rings under the character’s eyes, they all seemed more drained. Overall the play’s mood was projected through the appearance of the stage and actors.

Additionally, the stage effects added a lot to the play. Whenever there was violence, the lights went red and the different music played in the background. This lets the audience know that something bad was happening, as even when the violence was not seen, it was apparent through this change. For instance, when Tobias figured out that Sweeney Todd was killing his customers, through finding all of the coats from the deceased, the lighting was red and the music in the background deepened, letting the audience know that Tobias figured out Sweeney Todd was a murderer. There are many other instances where the lighting and the music told the audience to feel a particular way without the audience even realizing it. These effects added to the suspense and the mood of bitterness throughout the play. In summary, the stage effects contributed to the overall astonishing outcome of the play.

The play had many deeper meanings that made it worth watching for every audience member. First, there was the character arch of Tobias Ragg, played by Alex Nieves; from someone who was terrified and willing to turn a blind eye towards acts of evil around him to someone with immense bravery, willing to do whatever it takes to fight on the side of goodness. This is shown when he stands up to the rotten Sweeney Todd, demonstrating his moral courage. When Sweeney Todd gets Tobias admitted into an insane asylum, Tobias didn’t give up. In fact, he escaped and contributed to the destruction of Sweeney Todd. This is a good message for audiences because it shows that with the guidance of good morals, one can win any fight. Similarly, the overall message of the play is, as the Director’s Note states, “the good are very, very good and the bad receive their punishment in the end”. In the play, the good are able to defeat the bad, and while it would be nice if this rule was true for the real world, it can only exist on the stage. As in life, things are not as clear cut, no one is truly good or bad rather a mix of both.

The story is one worth being told because of its timeless message, to fight evil, and the tale was told flawlessly by the Morris Knolls students who contributed to the production of the play.

Greenburg, who played the singer in the asylum and was the fight director said “I have always loved doing theatre because I find I can express myself, try new things, and most importantly create a second family away from home. With every production I have been in a family dynamic has formed and I have to say that is really my favorite part of the shows here at Knolls!”. As an audience member, one can witness the students at Morris Knolls expressing themselves, while among the other members whom they have become so close to during the production- making every play a magic experience to watch.  Later this year there will be the much-anticipated spring musical, here at Morris Knolls.