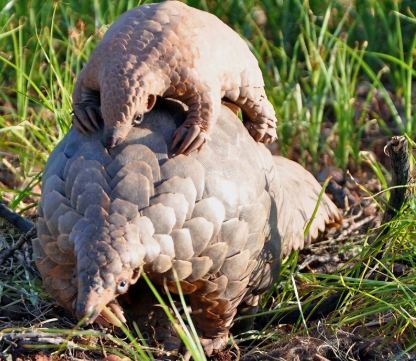 Pangolins are the most poached mammal in the world, yet few people know about this fascinating creature. Around 10% of the students surveyed at Morris Knolls recognized the word pangolin and no one could describe a pangolin accurately. Pangolins have scales so tough that a lion can not harm them, they have sticky tongues as long as their entire bodies, claws that can dig through gravel, and tails that can grab items. There are eight species of pangolins, half of which live in Asia, the other four find habitat in Africa. All eight species are endangered.

The pangolin’s name reveals a lot about them. Their name means roller in Maley, an Austronesian language, describing how they roll up into a ball when they feel threatened. All pangolins are covered with up to 1000 keratin scales, hence the nickname pinecone with legs. Being the only mammal with scales is very advantageous because it protects them from termites and ant bites, as well as from predators. If a pangolin does not have time to roll up, it will wave it’s sharp tail back and forth to protect itself from animals such as lions and hyenas. They also have thick eyelids, ears, and nostrils that can constrict to protect them from ants and termites. The termites that pangolins ea

t might otherwise destroy crops and buildings. Another name for a pangolin is a scaly anteater because they were once believed to be a species of anteaters, but it is now known that pangolins have their own classification.

It is crucial to understand the basics of pangolins in order to help them. Their lifespan is unknown, but a captive pangolin has lived to the age of twenty. The biggest species is the giant pangolin, which can be up to 50 inches long and 70 pounds, and the smallest is the long-tailed pangolin. A female weighs about half that of a male. All pangolins are nocturnal, shy, and solitary. However, they do interact while they are mating and with their young. The males mark their territory and the female will seek them out. Sometimes, the males will fight each other with their tails when in competition for a mate. Pangolins reproduce slowly, and they have a lot of trouble reproducing in captivity. A mother usually has only one baby at a time, this way if she feels threatened she can curl up into a ball with her soft scaled young, called pangopups, inside. Pangopups often are on their mother’s back, where they learn important survival techniques. They find habitat across Asia and sub-Saharan Africa in sandy areas of woodland and savannas. They live in underground burrows close to water. Unfortunately, due to deforestation pangolins face habitat loss. Yet, their number one threat is not habitat loss; it is poaching.

Pangolins are the most poached mammal in the world, with an estimated 1,000,000 pangolins taken from the wild from 2000-2013.  Globally, pangolin trade was made illegal in 2017, but China still continues to permit it. Most poaching is occurring in China and Vietnam, where pangolin meat is considered a delicacy and their scales are used for traditional medicine and folk remedies. The scales are claimed to be able to help cure arthritis, epilepsy and more, despite having no scientific evidence to prove so. Eating pangolin is also a sign of high class since they are very expensive. Many hunters do not realize that they are doing anything wrong, or that pangolins are endangered. When hunting alone, one could make the equivalent of a year’s salary from the sale of a single transaction of scales. For this reason, many families rely on this money. The middlemen are being used and making next to no profit, compared to the people who sell the pangolins. Those selling the pangolins are often part of a worldwide criminal network that drives other animals, such as elephants and rhinos, towards extinction as well. As the demand increases for pangolins, and there are fewer in China, people start hunting more in Nigeria and India. If pangolins become extinct, there will be terrible ecological and economical results. It is difficult to end this cycle though. The complications of ending this trade are evident in the U.S. It is estimated that before 2000, 21,000 pangolins were killed to create products made out of exotic leather, like cowboy boots, belts, and wallets. Instead of stopping the production of these unnecessary items, people started making them out of arapaima fish, who when tanned have the same diamond pattern. These are threatened by Amazon fish that can grow more than 9 feet long. Around 5,500 arapaimas have been killed for US products and almost all took place after 2011. Now, this fish population has drastically decreased. Clearly, just putting a ban on pangolin trade is not enough, governments need to follow up and ban all products made from vulnerable animals.

Fortunately, people around the world are working to help pangolins. Dr. Mark opened the first animal shelter in Nigeria and they buy live pangolins from local shops, rehabilitate them, and release them into protected areas. There are many organizations trying to research the extent to which trafficking is occurring, and bring awareness to the issue. There is a forensic science lab dedicated to solving wildlife crime, that studied pangolins to figure out what the scales could be used for. CNN helped build awareness by airing videos which lead viewers to donate $20,000, to help fund public service announcements that aired nationally in Vietnam, informing citizens that it is illegal to purchase pangolins. Further action is being taken by WWF, which works to reduce consumer demand in Asia, by campaigning and partnering with the governments and businesses. In 2016, 180 governments announced an agreement that ended all legal trade of pangolins. Lastly, volunteers around the world work in the IUCN SSC Pangolin Specialist Group that works to secure a future for wild pangolins. All actions, big and small, are instrumental in protecting pangolins.

More work needs to be done to protect pangolins, and everyone can help make a difference.   There are petitions to increase U.S. action and law enforcement. WWF created a Stop Wildlife Crime campaign to try and strengthen government regulations on wildlife crime which you can take part in. Simply taking notice of what you are buying and how it impacts wild animals would be a huge step in the right direction. Finally, educateing yourself and others is necessary because no problem can be solved if it is not realized and this problem needs to be solved. Imagine a world where people opened their eyes and saw that they needed to help pangolins.

Bale, Rachael. “How You Can Help Pangolins.” National Geographic, 15 May 2019, www.nationalgeographic.com/animals/2019/05/pangolins-how-you-can-help/.

Hilton, Paul. “Poaching Is Sending the Shy, Elusive Pangolin to Its Doom.” Poaching Is Pushing the Shy, Scaly Pangolin to Extinction, 23 Sept. 2019, www.nationalgeographic.com/magazine/2019/06/pangolins-poached-for-scales-used-in-chinese-medicine/.

“Pangolins.” Official Web Page of the U S Fish and Wildlife Service, www.fws.gov/international/animals/pangolins.html.

“What Is a Pangolin?” WWF, World Wildlife Fund, www.worldwildlife.org/stories/what-is-a-pangolin.