Opinion on the Correlation Between COVID-19 and Wildlife 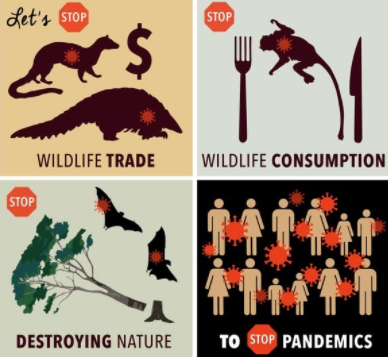 Unfortunately, around the world and even within the Morris Knolls community people are misinformed about the origin of COVID-19 as many do not fully see the vast connection between COVID-19 with the wellbeing of wildlife. It is important to clear these misconceptions by examining the origin of COVID-19, how wildlife played a role, and why the wellbeing of wildlife must be taken more seriously if people are to tackle viral pandemics.

When asked about this issue and the significance of MK students understanding it the AP Environmental Science teacher at Morris Knolls, Mrs. Fudrini, stated, “I believe it is important for our students to have a level of scientific literacy and awareness about the interconnectedness between humans and their surrounding ecosystem.  As our population increases and we infringe more and more on wildlife populations we need to be cognizant of the risks that arise.  One of which is viruses jumping from wildlife species to human species.” This is evident through the rise in past viruses such as SARS-CoV and through the development of COVID-19.

SARS-CoV first appeared in humans in 2003, at which time a disproportionate number of exotic food handlers had the virus and it was prevalent in animal markets. Through testing animals and the continuation of tracing the history of the virus, scientists have come to believe that the masked palm civets were the original source of the virus. Other pandemics have also originated from humans’ close contact with animals, such as the Ebola virus from bats. Yet, little change has been made in regards to the exotic food industry or humans breeching other species’ environment.

The first case of Coronavirus has been linked to a wholesale food market in Wuhan City, China, in December 2019. Many of the initial cases had gone to the food market and environment samples of the market tested positive, supporting this theory. By January 2020 the genome of the virus had been taken, which indicated that COVID-19 was a zoonotic virus, meaning the pathogen jumped from a non-human animal host (likely a vertebrate) to humans. This also supports the idea that  SARS-CoV-2 originated in a food market because of the often unsanitary environments where animals are kept in close proximity to humans.

SARS-CoV-2 genetic testing has pointed to bats and pangolins as being the possible source. Since bats are not often near humans, scientists think there was most likely an intermediary animal that transmitted it to humans, which they have been pangolins. Pangolins are the most poached mammal in the world; according to a 2016 report by the wildlife advocacy group WildAid, “more than a million pangolins had been poached over the previous decade” this according to some scientists, could account for nearly 20 percent of all illegal wildlife trading. They are kept in boxes, stressed out, and with open wounds, as they await their slaughter so humans can consume them. This treatment promotes the transmission of disease.

It is still not certain which animal was the original source for SARS-CoV-2. However, what is evident is that humans’ negligent treatment of living beings that are a part of the food industry and their infringement on wildlife’s habitat has enabled the spread of disease. In the past, not enough was done in regards to ensuring the wellbeing of animals and preventing another pandemic, facilitating COVID-19.

Through education, people can begin to realize the links between protecting the ecosystem of wildlife and human health. This can start right here at Morris Knolls and right now with you.