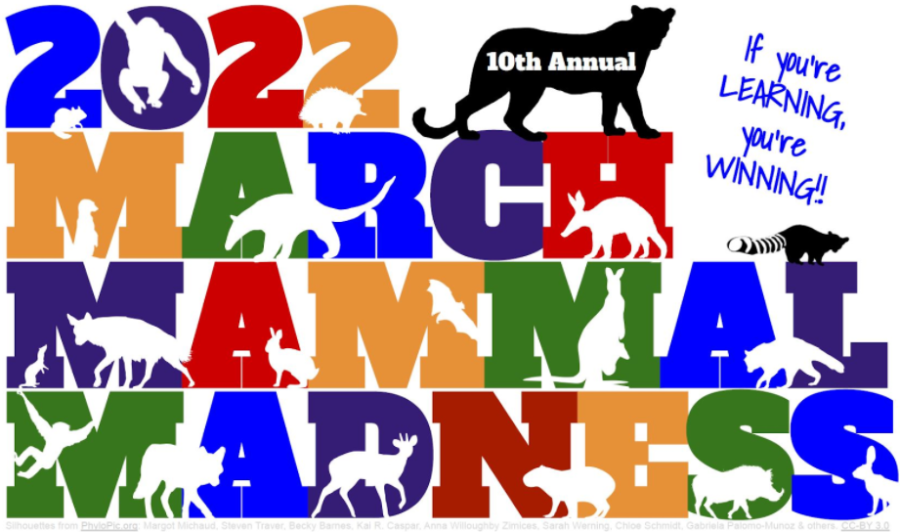 January brings a new year, February brings snow, and March brings Madness: March Mammal Madness (MMM). The tournament consists of simulated battles between animals which are informed by scientific literature and then molded into a lighthearted story told by the Rhodent Round Table. This is the 10th year of the tournament and the 3rd year that Mr. Mindrebo’s biology classes have participated. Within all of his classes, Mr. Mindrebo introduces his students to MMM, in doing so promoting a fascination for wildlife to around 100 Morris Knolls students every year.

This year, Mr. Mindrebo’s biology classes started filling out their brackets on March 1st. The CPB biology students spent one block on preparation, creating a slideshow with important information on all of the participants and once the tournament starts they spend around 10 minutes reviewing and looking at the results. The AP biology students will conduct their research in a less formal manner and fill out their brackets more independently. All in all, every student in Mr. Mindrebo’s classes will be introduced to this wonderful tournament and the animals involved.

The impact of this can not be undermined, as some students have continued to follow up with the tournament ever since they learned about it. Senior Grace Haag is one of these students. “I was first introduced to March Mammal Madness sophomore year when I took AP Biology. Although I had never previously been that interested in March Madness the basketball tournament, I found that this tournament was instantly gripping. I loved rooting for the underdogs, getting to know species I had never previously heard of, playing with my family and being able to gloat whenever I won.”

Whether or not someone is taking biology, they can participate in the tournament (MMM: How to Play). The first step is printing out a bracket and gathering friends and family to partake will promote friendly competition and add to the experience. After that, one can research the animals to help them make decisions about who they will choose to win each battle. To maximize one’s experience and chance of winning, they can read through the helpful slideshow (Combatant Info 2022 MMM) and explore these websites (Academic Information Resources) provided by Arizona State University, where MMM is run. Such in depth research, although enriching, is not required to do well and enjoy participating. It is important to remember that the lower seed number means that the animal has a higher chance of winning and they have home habitat advantage for the first few rounds of the tournament. The next step is to simply follow up on the matches and mark your bracket. There are 65 animals one can learn about, all falling into one of four brackets: Mammal Collectives, Wild North America, Queens of the Sea and Sky, and Why Not Both. Mr. Mindrebo thinks that these brackets show great potential for an exciting tournament, “I am very excited to see what happens in the Wild North America regional. Having the Gray Wolf, Grizzly Bear, Jaguar, Elk, Mountain Lion and black bear all in one region should be incredibly interesting!”  Finally, you can tally up your points and see who won!

Throughout the tournament, it is important to reflect on what the game stands for. this way one will gain both memories and knowledge. Grace Haag sheds light on how MMM has increased her awareness of the environment, “Home habitat advantage makes you think about how when we as humans destroy a habitat we are putting that species at a disadvantage. So while being a fun tournament it continuously reminds me to think more about the species and how we impact their survival.” 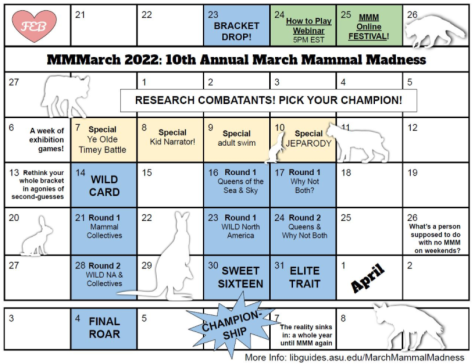 While Men’s NCAA March Madness Tournament Brackets will not be announced until March 13th, the MMM brackets were released on February 23, giving participants plenty of time to fill out a bracket and encourage others to do so. The matches begin on March 14th and happen every Monday, Wednesday, and Thursday up until the Championship on April 4th. Results are posted at 8:00 pm MST that night on twitter @2020MMMletsgo, the blog Mammals Suck… Milk, the March Mammal Madness Facebook Page, the Arizona State University’s website (Results), and on the Rodent Roundtable Recap Youtube channel (Rodent Roundtable).

By simply filling out a bracket one can participate in March Mammal Madness throughout the upcoming month and in doing so engage with the Morris Knolls community while learning about wildlife.