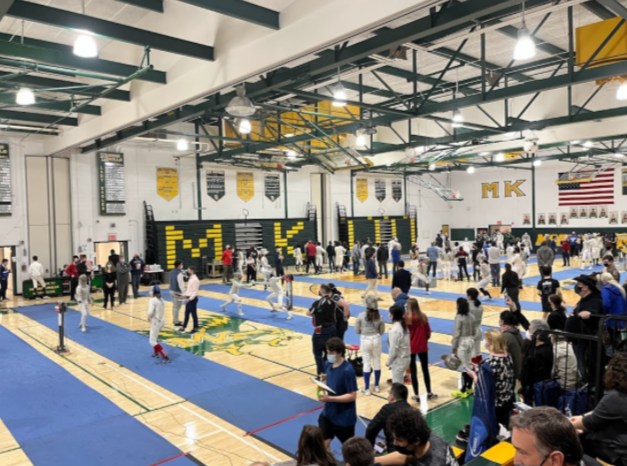 Like most winter sports, fencing recently came to an end at Morris Knolls. Here is a quick recap of the great season.

To anyone wondering what, exactly, fencing and being on the team entails, Foil Arianna Crum summed it up perfectly with the words “Make new friends, then jab them”.

The fencing season started on November 29, 2021. After what fencers somewhat affectionately call “Hell Week” due to the combination of getting back into shape and learning a new way of moving, it was all smooth sailing.

The first meet happened on December 22, against Mendham. Returning fencers had no problem getting back on the strip, but there was some nervousness amongst the newbies that were going to make their debut. Aly Frio, Meghan Bedell, Trisha Patel, Maggie Yotko, Maya Tajudeen, and Abril Rodriguez showed off their new-gained skills, and helped win the girls’ meet 15 to 12.

This year was also extra special for the Morris Knolls fencing team as they hosted the state individual tournaments, in which two of their very own fencers competed. Sabres Niel Lilov and Adam Tang made it to states, with Lilov making it all the way to first place state champ. When asked about this, he claimed that it is his most cherished memory of the fencing season. The boys’ sabers also made it all the way to second place in states.

This year, the team flourished under the leadership of Ruby Sikes, Angela Shasa, Adam Tang, and Wyatt Harris. Ruby, Adam, and Wyatt will be missed as they move on to greater things in life, but Angela will stay for one more year, holding down the fort. Saber Trisha Patel perfectly summed it up, saying how “the upperclassman made the season so enjoyable”.

Now that the season is over, and along with it the two-and-a-half-hour practices and six-thirty-start-time meets, the team will have a lot more time on their hands. When asked about what they will do with this newfound freedom, the common theme seems to be getting back to their jobs and hobbies or moving on to a spring sport like track and field.

Overall, it was a very productive season, with the girls having a 6 wins to 6 losses record and the boys an 8 wins to 5 losses record. Hopefully, next year will be just as great.